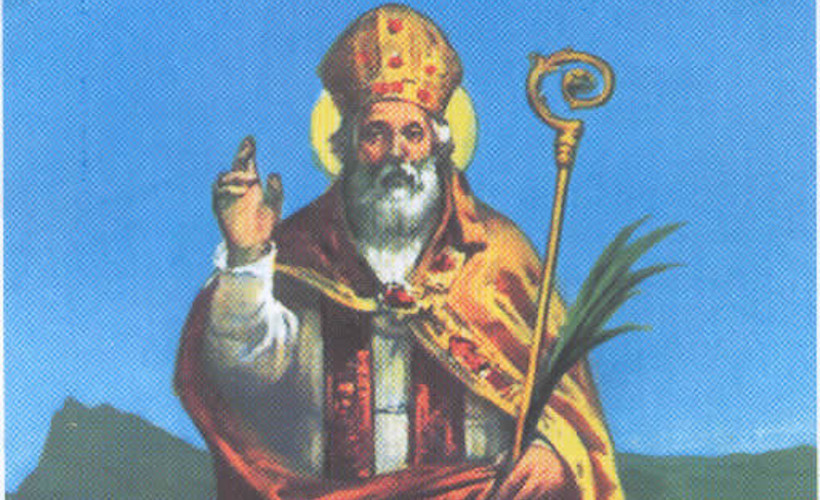 Excavations carried out in the 17th century under the Basilica and historical sources reveal the existence of this saint. After a millennial cult of the Terni community towards San Valentino, dating back to the early years of the new Christian religion, "a general awakening of religious sentiment in the city took place in the seventeenth century, when Monsignor Onorati, Bishop of Terni, obtained permission from the Holy See, he thought of starting some research in the ruined Basilica of Saint Valentine ».

On 23 June 1605 the municipality financed the research work and under the vision of a special commission, the archaeological excavations began. Under the main altar, at a depth of twenty palms, a marble ark was found, rustic on the outside and inside carved in relief with a cross the size of an arm, containing a lead box. When the lid was removed, the five-foot-long body of San Valentino was recognized, with its marble inscription on it.

Almost all the main bones of the Sacred Body were recognized; only the skull, separated from the body, was not totally whole. In an atmosphere of joy and emotion of those present, "the relics were enclosed in a cypress urn lined in red which was sealed and then covered with a gold-embroidered cloth".

In September 1642 the Sacred Congregation of Rites decreed that each city that had more than one patron saint had to elect only one. With a sentence of 5 March 1644 the Sacred Congregation of Rites asked the citizens of Terni to choose the protector of the city between San Valentino, San Procolo and San Anastasio Confessore; the citizens recognized San Valentino as the only Protector of Terni.

Even today, inside the Basilica of Saint Valentine in Terni, it is possible to visit the urn of the Saint, placed at the end of the 1700s under the main altar of the Basilica, a place where numerous pilgrims pray next to the remains of the Patron Saint of the In love and Patron of the city.

In Terni, Saint Valentine has always been remembered and celebrated for its ancient values, but since 1644, the year in which the Saint was elected protector of the city, citizenship has tightened even more around him to ask for protection from families and the city. and to receive comfort from the sick.

The life of Terni merges with this millenary popular devotion for Saint Valentine. Professor Pietro Borzomati explains how citizens live the feast of the patron saint of the city. "It is the only day of the year in which the City of Terni lives a profoundly different dimension of life: the activism, the noises, the haste of passers-by give way to a moment of silence, serenity, reflection, which they are the antithesis of the usual ways of life and contrast with the fervent work of industries and the onerous commitment of the inhabitants.

The city stops, in the churches there are, as for the great solemnities, the celebrations in honor of the Patron, while a multitude of people go on pilgrimage to the Basilica to venerate the remains of the Saint and not to miss the Bishop's Pontifical in the course of which the administrators of the city pay homage to Saint Valentine who was the first Bishop of Terni ».