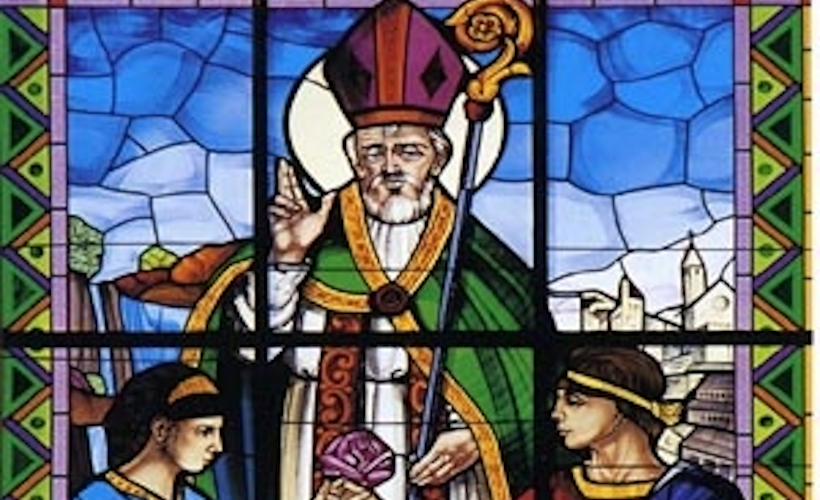 After 313 AD, with the Edict of Constantine, the faithful of St. Valentine in Terni increased to the point of giving rise to a liturgical feast on February 14, the day of his death. Carini Gentile states that the feast of St. Valentine was already recorded in the centuries prior to the fifth century, an element later confirmed also by Antonian Athenaeum, who argues that the only festival set by the Gerominian Calendar in the fifth century was that of Terni.

The cult of St. Valentine soon spread abroad around the eighth century, a period in which there was a massive expansion of the liturgy thanks to the spread of the Roman calendar throughout Europe. In many European countries there were breviaries that celebrated the memory of the Saint of Terni; there are testimonies of passages and summaries of the Passion of the Terni martyr which were read on February 14th.

Another element that testifies to the spread of the Valentinian cult is the multiplication of saints named Valentine in many European countries starting from the 10th century. They built basilicas named after them, some of which still claim the donation of some relics granted to them in past centuries. The cult of the faithful was animated by the fact that St. Valentine was considered an example of life for the sanctity of his existence: he dedicated his life to a tireless work of the apostolate, he was among the first propagators of Christianity in Umbria, he brought comfort to the oppressed and to the sick.

In England at the beginning of the eighth century, local rites were mixed with pagan-Roman rites that gave rise to customs and festivities merged together. In February, in addition to the feast of St. Valentine, the Lupercalia were also celebrated, or the feast of fertility, introduced in Anglo-Saxon countries by the Romans on the 15th.

According to legend, during the festival, "the names of the young men and women who were supposed to celebrate their wedding during the year were drawn. Over time, on this day, people got used to exchanging gifts and flowers ".

In the relationship between the Lupercalia and the celebration of the Lupercalia's feast, Gianna Vancini believes that the identification between the two holidays could have been determined by the fact that the Pope, trying to soften the pagan celebration of the Lupercalia, moved this anniversary from February 14. As a result, aspects of the pagan festival ended up being linked by the people to Valentine's Day, which was celebrated on that day, changing the nature of the pagan fertility festival into a Christian holiday over time.

In this way, according to legends, Valentine's Day would become the protector of lovers. Among the canonical festivities, the Saturnalia and the Lupercalia were certainly the most awaited by the population. The ceremonies were both a purification rite through the sacrifice of a dog (which has always been a symbol of fidelity in love) and a celebration linked to prosperity and fertility that love is the materialization of.

At the end of the fifth century, when the Lupercalia were abolished with Pope Gelasius I and the feast linked to love passed from February 15 to 14, it is inevitable that the people attributed part of the ancient rituals of the Lupercalia to Valentine's Day. The desire to celebrate Valentine's Day as the protector of love continued over the centuries without ever experiencing moments of crisis.

In the nineteenth century the party began to take on a romantic but also commercial character, as reported by Pompeo De Angelis. In the early 1800s, the English Dobbs printing house began producing the "Dobbs Patents", so called from the name of the manufacturing company.

They were picture postcards used by lovers to exchange loving messages. The postcards were very successful to the point that they presided over the 1851 Exhibition in London.

In the following years a craftsman named Joseph Mansell began to produce love cards decorated with lace, but the turnover of sentimental cards expanded from 1860 thanks to the perfumers, who prepared bags with perfumed essences to sell. along with the Dobbs.

The main producer of the bags with scented essences was Eugène Rimmel who opened stores in London, Paris and New York. In the United States there was the knowledge and spread of Valentine's Day thanks to love cards, promoting February 14 as the date of printing and dissemination of the decorated cards. In fact, Valentine's Day was created.

The occasion that first brought the cards to the New Continent was in 1840, when a Massachusetts stationer named Howland received from an English friend a special note with painted flowers and embroidered with lace. Howland's daughter, Ester, immediately wanted to resume and commercialize her idea by producing decorated love cards with her hands.