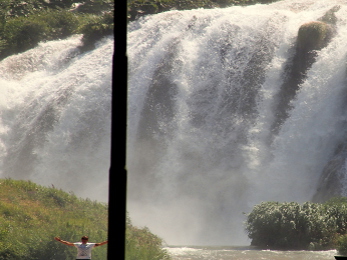 Brief history of the city of Terni.

The location of Terni, which in Roman times was called Interamna because it is located between two rivers, and its location in the valley, compared to the small neighboring towns located on the surrounding cliffs and hills, make the city a crossroads of tourist places and centers of worship present throughout the Umbria Region.

In the mid-19th century, following the unification of Italy, the commercial activities of the city consisted of manufacturing activities that had developed around the abundant waters carried by the streams and the city, from peasant and artisan, was moving towards a different economic and social identification thanks to the birth of important industrial sites.

The industry still represents an important sector of the Umbrian economy, but next to it, Terni has other sectors in enormous development, such as the tourism of its cultural beauties (constructions from the Roman era, Renaissance palaces) and its centers of millennial cult.

A rich landscape of characteristic medieval villages extends around the city. The towns of Stroncone, Acquasparta, San Gemini, Narni, Amelia, Orvieto and many other small towns, each with typical folkloristic and gastronomic events rich in history, at the same time strengthen the identity of these places and enhance their traditions.

The green of the hills and the numerous waterways express their natural beauty. Lake Piediluco overlooks and feeds the Marmore Falls, the highest waterfall in Europe, which evokes strong emotions due to the impetuous quantity and force of the water that falls into the valley after a drop of one hundred and sixty-five meters.

In the naturalistic area of ​​Valnerina there are the major sports centers in contact with unspoiled natural landscapes. Routes for lovers of cycling, canoeing, horseback riding, hiking, sport fishing, rafting, hydrospeed, rock climbing, canyoning, parachuting, hang gliding and paragliding, wind-surfing: these are just some of the sports activities practiced in these places by tourists and simple lovers of sport and nature who wish to be in close contact with a healthy environment.

The water in the city of Terni not only supports industries and allows you to practice the many sports mentioned above. In fact, the mineral springs that feed the numerous thermal resorts are also noteworthy.

There are also places from the Roman era, such as the ancient city of Carsulae, crossed by the Via Flaminia, where monuments and archaeological finds related to the public and private life of ancient Rome are well preserved.

The city of Temi was the crossroads of the evangelization paths of St. Benedict of Norcia and St. Francis of Assisi; in the areas crossed by the Saints centers of worship were born which are still in full activity today. In memory of San Benedetto we remember the Monastery of San Cassiano, founded by a community of Syrian monks in the green gorge of Stifone, near Narni, and the Abbey of San Benedetto in Fundis, near Stroncone, of which some ruins remain.

Examples of Franciscan buildings are the Church of San Francesco in Terni, where the followers of the Saint of Assisi settled at the end of the 13th century, the Convent of San Francesco in Stroncone, founded by the homonymous saint, and the Sacro Speco, near Narni. , example of a Franciscan hermitage nestled in the mountain still today a place of peace and silence for contemplation and peace of mind.