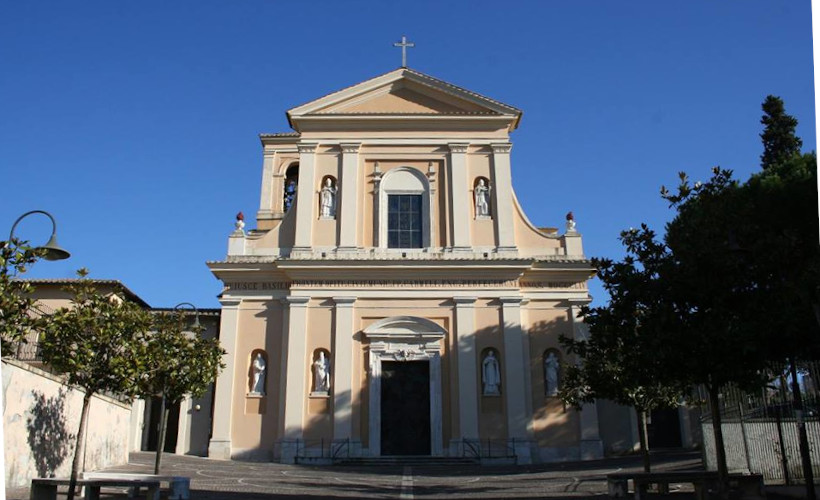 Basilica erected in the place where St. Valentine was buried.

After the beheading of St. Valentine, the body was transported to Terni and buried in the place where today's Basilica now stands. In this area originally stood a pagan cemetery and in 1605 the Sacred Body was found, preserved by the Carmelite Friars. A first basilica was erected on the cemetery which over the centuries suffered destruction and rebuilding.

The seventeenth-century facade, the elegant portal and the large central window were renovated in 1854. The interior has a single nave, decorated with garlanded Ionic capitals supporting a notched architrave. In the side walls there are two chapels on each side with elegant 17th century marble altars and 17th century oil paintings on canvas.

In the choir, in correspondence with the urn with the remains of St. Valentine, there is a small 17th-century altar that contains an oval painting on canvas depicting the Martyrdom of St. Valentine.

Next to the main altar stands "The Madonna appears on St. Valentine", placed against the background of the city of Terni near two elegant colored marble torches, placed on either side of the presbyter. The finds from the "Valentiniana area" have been placed in an adjacent room and make up the small Museum of San Valentino.

In the Museum there are pagan and Christian inscriptions and plates, remains of architectural decorations, a sarcophagus from the Roman era and small fragments found during the numerous renovations of the Basilica over the centuries.

Visit to the Basilica of Saint Valentine